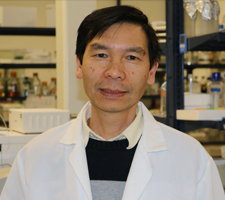 Hiep is co-founder of Abzyme Therapeutics. He has more than 20 years of academic and industrial experience. He is author of more than twenty peer-reviewed publications and inventor of five issued US patents plus two pending patent applications. He joined Abzyme from Rockland Immunochemicals, where he was Director of Molecular Biology Services. In 1983, as a member of the Vietnam team competing in the International Mathematical Olympiad, an international competition for high school students, he won a silver medal. He continued as a student of Department of Biology at the Leningrad State University, Russia, without admission examinations. He graduated the university with the highest honors. After his PhD in 1992, he began to work on DNA replication, repair and recombination at the National Institutes of Health, USA. Later, he joined Lifesensors as a Director of R & D focused on drug discovery and protein expression technologies. He holds PhD in Molecular Genetics from Leningrad State University, Russia.